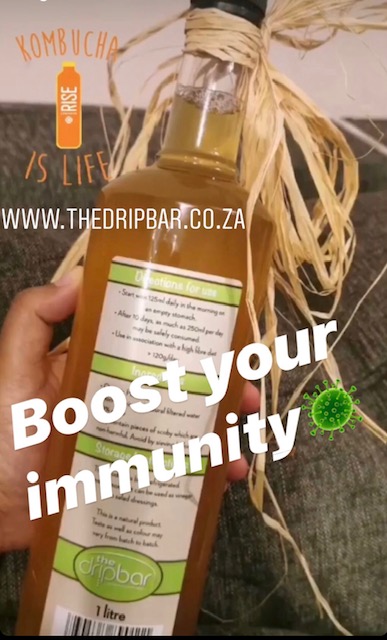 By Chantal Du Chenne, the Health Coach and owner operator of the DripBar.

Kombucha tea is a fermented tea that has been consumed for thousands of years.

Not only does it contain the many health benefits of tea — it’s also rich in beneficial probiotics.

1. Kombucha tea is a potential source of probiotics

Kombucha is tea that has been fermented. This makes it a good source of probiotics, which have many health benefits.

Kombucha is thought to originate in China or Japan.

It’s made by adding specific strains of bacteria, yeast and sugar to black or green tea which is then allowed to ferment for 7-28 days.

During this process, bacteria and yeast form a mushroom-like film on the surface of the liquid. This is why Kombucha is also sometimes known as “mushroom tea.”

This ‘mushroom’ is a living Symbiotic Colony of Bacteria and Yeast, or a SCOBY, and can be used to ferment new Kombucha.

The fermentation process produces acetic acid (also found in vinegar) and several other acidic compounds, trace levels of alcohol and gases that make it carbonated.

A large amount of bacteria also grow in the mixture. Although there is still no evidence for the specific probiotic benefits of Kombucha, it contains several species of lactic-acid bacteria which may have probiotic function.

For this reason, a natural probiotic like Kombucha to your diet may improve your health in many ways.

2. Green tea Kombucha (available at the DripBar) provides the many added benefits of Green Tea

Kombucha made from green tea may offer many of the same health benefits as green tea itself, such as weight loss and blood sugar control.

Green tea is one of the healthiest beverages on the planet.

This is because green tea contains many bioactive compounds, such as polyphenols, which function as powerful antioxidants in the body.

Kombucha made from green tea contains many of the same plant compounds and presumably boasts some of the same benefits.

3. Kombucha is rich in Antioxidants

Antioxidants are substances that fight free radicals. Free radicals are reactive molecules that damage your cells, causing ageing and disease.

Many scientists believe that antioxidants from foods and beverages are better for your health than antioxidant supplements. This is because natural anti-oxidants are more bioavailable or easily used by the body.

Kombucha, especially when made with green tea, appears to have antioxidant effects in the liver. The liver along with the skin, digestive tract, lymph system and kidneys is one of the five fundamental detoxification systems of the body.

Kombucha is rich in tea polyphenols and acetic acid, which have both been shown to suppress the growth of undesirable bacteria and yeasts.

One of the main substances produced during the fermentation of Kombucha is acetic acid, which is also abundant in vinegar.

Like the polyphenols in tea, acetic acid is able to kill many potentially harmful microorganisms.

Kombucha made from black or green tea appears to have strong antibacterial properties, particularly against infection-causing bacteria and Candida yeasts.

5. Kombucha Is Healthy When Made Properly

Kombucha is a probiotic-rich tea with many potential health benefits.

You can purchase it at the DripBar or make it yourself at home. However, be sure to prepare it properly.

Contaminated or over-fermented Kombucha can cause serious health problems. The sugar content of homemade Kombucha may be too high and it can also contain up to 3% alcohol which is also too high.

A safer option is to buy Kombucha from a reliable source. Some commercial products are of a good quality and are also considered alcohol-free, meaning they must contain less than 0.5% alcohol.

Always check the ingredients of your Kombucha!

Avoid brands that are: